Hello! I post a little news to tell you that Robert Rodriguez’s movie ‘Machete Kills‘ is avalaible in Dvd & Bluray since January 21st. You can order it on Amazon in DVD or in Blu-ray. If you haven’t see Amber Heard as Miss San Antonio yet, you can do it now! I’ll do it soon, and I’ll upload screencaptures of the movie in the gallery. Hello, here is a new clip of Amber Heard, Danny Trejo and Michelle Rodriguez from ‘Machete Kills‘ called Who’s that bitch ? Amber Heard is amazing on it! You can also watch a new featurette called “If Looks Could Kill” where Amber appears. I’ve uploaded screencaptures in HD of these two new videos in the gallery. You can also watch the two videos below.

Hello everyone! Here are some new pictures from the movie ‘Machete Kills‘! For french fans, Machete Kills hits now on theaters! I’m going to see it this tuesday, I’ll tell you what I think about the movie!

You can find in the gallery one new poster featuring Amber, pictures from behind the scene and one new still. Below you can also watch the Amber Heard‘s On Set Movie Interview. 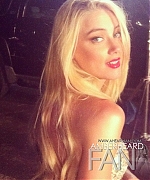 Here are some new exclusive promos stills from the movie ‘Machete Kills‘ where Amber Heard plays Miss San Antonio. Thanks to Matheus Simon for these exclusive pictures. You can find it in the gallery now. Machete Kills hits on theaters on October 11th 2013. Here is the first movie clip of ‘Machete Kills‘ where we can see Amber Heard as Miss San Antonio. This clip is called “Wall of Weapons“. Amber Heard is awesome in this sexy character. You can watch the clip below, and I’ve uploaded screencaptures in HD in the pictures gallery.