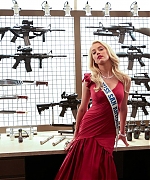 Here is a new trailer for the movie ‘Machete Kills‘ where Amber Heard plays Miss San Antonio!! This trailer is the full length trailer of the movie. Amber Heard appears once again few times in that new amazing trailer!! Don’t forget that date : October 11th, ‘Machete Kills’ will be in your theaters! I’ve uploaded screencaptures from this trailer in HD in the gallery. You can watch it below. Here is a new featurette for the Robert Rodriguez’s “Machete Kills” movie, who is featured Michelle Rodriguez and Amber Heard. Amber Heard plays Miss San Antonio! She’s super sexy in this video!! I’m impatient to see more of Amber in this movie! I’ve uploaded screencaptures in HD in the gallery. You can see the video below. Hello everyone! Here is the first official trailer of the movie ‘Machete Kills‘ where Amber Heard plays ‘Miss San Antonio‘!! This trailer is explosive and really fun! You can see Amber in this trailer. Below you can see it, and I have also uploaded screencaptures from this trailer below.