Hello everyone!! Amber Heard has been spotted yesterday with Johnny Depp, Arriving at the ‘Narita‘ Airtport in Japan. Johnny and Amber was with the Johnny’s children, Lily-Rose Melody and Jack John Christopher. You can see pictures in the gallery. I’ve also uploaded new stills from movie ‘Paranoia‘. The movie will release on August 16th! Here is the first official movie poster of ‘Paranoia‘ where Amber Heard plays Liam Hemsworth’s love interest : Emma Jennings. Amber Heard is on this poster with her co-stars Gary Oldman, Harrison Ford and Liam Hemsworth. You can see it in the gallery by clicking on the thumbnail below. I also remember you the story with the blockquote below. If you want you can like the Official Facebook Page of the movie, or follow it on twitter.

The high stakes thriller Paranoia takes us deep behind the scenes of global success to a deadly world of greed and deception. The two most powerful tech billionaires in the world (Harrison Ford and Gary Oldman) are bitter rivals with a complicated past who will stop at nothing to destroy each other. A young superstar (Liam Hemsworth), seduced by unlimited wealth and power falls between them, and becomes trapped in the middle of the twists and turns of their life-and-death game of corporate espionage. By the time he realizes his life is in danger, he is in far too deep and knows far too much for them to let him walk away.

Stepped out with her dog

Here is the latest candid of Amber, Stepped out with her dog in Philadelphia, during her break-time from the set of her movie ‘Paranoia‘ (December 18th). Amber looked a little exhausted on this picture, but she still have a great outfit. You can see 6 MQ pictures from this candid in the gallery. Please do not forget to like the Facebook Page of Amber Heard Fan!! – GALLERY LINKS :
Candids from 2012 – Stepped out with her dog in Philadelphia (December 18th)

On the set of ‘Paranoia’

Here are some new pictures of Amber on the set of her movie ‘Paranoia‘, from December 13th. I’ve added pictures where she was filming a night scene with Liam Hemsworth in Philadelphia, and earlier in the afternoon she was walking on the set with her dog. You can see the pictures in the gallery now. 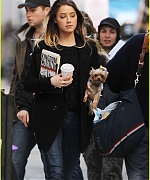