OMGG!!!! Amber the new issue of Angeleno Magazine for this month of August, a new shoot release with this scans, make by . Amber is really amazing on this shoot!!! You can see the scans and the shoot in the gallery. You can also read the interview below. 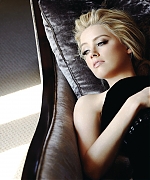 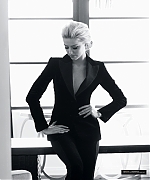 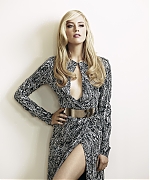 Unlike your average red-hot starlet making the rounds through Tinseltown, Heard has been carving inroads into our consciousness since age 16. Roles in TV’s Jack & Bobby, Hidden Palms and The O.C. announced to the world a star was in the making, while her silver-screen gigs—the film version of Friday Night Lights, as well as Alpha Dog, All the Boys Love Mandy Lane, The Stepfather, Never Back Down, The Joneses and Judd Apatow cult smash Pineapple Express—have become progressively more dynamic. She’s been strong from the start, and she just keeps getting better. Following in the footsteps of other famous blondes like Claudia Schiffer and Drew Barrymore, Heard was recently named the new face of Guess, and will star in the brand’s fall campaign.

But it’s not just good looks that are gaining her attention: Her portrayal of a young Charlize Theron in North Country was perhaps a prophetic bit of casting; Theron has shaken off the “bombshell” label and taken her place among Hollywood’s finest actors. So, too, could Heard, especially once upcoming films like The Rum Diary and Syrup, as well as NBC’s fall TV series The Playboy Club, are seen.

“I couldn’t be more excited for The Rum Diary to come out,” says Heard, 25. In this big-screen adaptation of Hunter S. Thompson’s classic novel, Johnny Depp plays protagonist Paul Kemp and Heard is his mythic paramour, Chenault. “It was definitely my favorite movie to film. I’m a huge fan of Hunter S. Thompson, and it’s been a long time coming.”

While the film was originally slated for release in late 2010, Depp’s film roster was rather full. To ensure the film’s success, the powers that be decided to hold it until October 2011. “It was all about allocating time,” she says. And though Heard’s been enthusiastic about her other recent films—John Carpenter’s The Ward, Drive Angry, The River Why—Thompson’s tale has long been one of her favorite reads. “It’s about honesty, and art in the face of industry and commerce. It has the elements of a love story, but it’s ultimately about so much more.”

Heard knows a thing or two about love, particularly the love an actor feels for her roles. It’s this fact that makes her exceedingly grateful to star as the mysterious Bunny Maureen in NBC’s prime-time drama The Playboy Club, set against the backdrop of the ’60s sexual revolution in Chicago. “I’m so glad to be working on one character [over a period of time], and really develop her,” she says.

Maureen is a beautiful and enigmatic addition to the sexy waitstaff at the Playboy Club, where celebrities and mobsters mingle and top-notch singers croon behind a haze of low lights and cigar smoke. “It’s an epic background for any show,” Heard says. “It was such a perfect moment, and not about sex. They were challenging norms and standards. They’d have Ike and Tina playing on any given night. Hugh Hefner was so incredibly talented—and perhaps a bit lucky, too.”

Heard admits she goes into mourning when a film wraps. “You put everything on hold and make this character come to life, and it’s like saying goodbye to a friend or a lover,” she says. “What’s even more disheartening is when you see the movie come out and it doesn’t read at all how you filmed it. Now, with The Playboy Club, I can see this character grow and work on her for a long while.”

It seems the show’s creator, Chad Hodge, and its director, Alan Taylor, struck gold by landing Heard for this part. First off, she has a lineup of high-profile releases—The Rum Diary and the offbeat love story Syrup, starring Shiloh Fernandez and Kellan Lutz and slated for release early 2012—which happen to be timed perfectly to coincide with The Playboy Club. Aside from that, she’s sharp, intense, exceedingly easy on the eyes and has a surefire secret: “Nerve,” she reveals. “That’s how I do the job.”

Heard applies nerve to more than just acting. This past January, Heard, who refuses to be labeled in terms of her sexuality, created a stir by bringing her photographer girlfriend Tasya van Ree to the 25th annual GLAAD Media Awards. Emerging Hollywood stars so often fear career backlash by being honest about their sexuality, but she felt that the truth was more important than her filmography. “It’s not always nice, the things that I hear, but I believe in doing the right thing,” she says. “It’s a scary and sometimes weird ride, but we have young generations looking to us as role models.”

While Heard was filming Syrup in New York, marriage equality passed into state law, and she was able to witness the joy firsthand. “It was one of the most incredible experiences of my life, to celebrate equality,” she insists. “I couldn’t be more humbled by the whole experience.”

Brave on screen and off, Heard is a golden girl that Hollywood believes in… and the viewers aren’t far behind.

No Responses to “Angeleno Magazine – August”