1999, Claremont, California. Middle-class kids, in their 20s, talk trash, wave guns, hang out in a pack. Johnny Truelove, drug dealer and son of a underworld figure, threatens Jake Mazursky, an explosive head case who owes Johnny money; Jake responds by breaking into Johnny’s house. On impulse, Johnny and a couple pals kidnap Jake’s 15-year-old brother, Zach. Zach’s okay with it, figuring his brother will pay the debt soon. Johnny assigns his buddy Frankie to be Zach’s minder, and they develop a brotherly friendship. Zach parties with his captors as things begin to spin out of control. Group think, amorality, and fear of prison assert a hold on the pack. Is Zach in danger ? 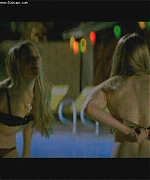 – When Wanda Haynes screams “Heil” in Jake Mazursky’s apartment, the entire part was improvised. The cast went along with it, and director Nick Cassavetes kept it in the film.

– The film begins with actual home video of some of the cast members when they were children. Anton Yelchin is the last child shown.

– Pictures
Clik here to see all the pictures of Amber Heard from “Alpha Dog” in the gallery of the website.