Amber Heard appears this month in the 326# issue of “i-D Magazine“, called “The Street Issue”. Below is the little news from the website with the amazing photoshoot that Amber Heard makes for the magazine with the photographer Michael Hauptman. I’ve also uploaded one scan from this issue. 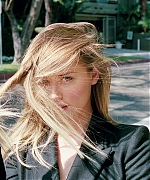 Amber Heard may look like the ultimate Hollywood bombshell, but don’t be deceived. Fiery, passionate and opinionated, she’s more about guts than glamour, and life experience over luxury. i-D reports…

It’s the morning after Independence Day, and Amber Heard calls i-D from her home in Los Angeles. As we’re talking, a sleepy, familiar voice can be heard, occasionally taking Amber away from the phone. It’s early in the morning on the West Coast; we can only assume the man rudely interrupting is Johnny Depp.

“I have to fight, tooth and nail, everyday, for my private life,” Amber says when the conversation starts veering away from her work. We know she’s with Depp. We know that, before, she was with (female) photographer Tasya van Ree, but what else do we know about the 27-year-old Texan? One of the most visible film stars in the business, who goes to bed with one of the most coveted men on the planet, is actually a bit of a mystery. She’s in the film industry’s “purgatory” right now, with two films in pre-production and three films – Robert Luketic’s Paranoia, McG’s Three Days and Robert Rodriguez’s Machete Kills – lined up for release. Google her and you’ll get a thousand paparazzi shots; Amber shopping, Amber in restaurants, Amber emerging from clubs. Perez Hilton and The Daily Mail leech on her, but she has no Twitter feed or Facebook page, just a lot of imposters. In our interview, she talks of “the Barbie box”, of the labels she gets from a presumptuous press, and an over-familiar industry, of having to put up with people who think they know her. “Amber Heard Gay” is one memorable headline from The Huffington Post. “Believe me, I’m more complex than that,” she says.