Here is a news about the movie ‘London Fields‘. Amber Heard’s actor boyfriend Johnny Depp is making a cameo in ‘London Fields’, based on Martin Amis‘ 1989 darkly comic crime novel of the same name. You can read this news below! 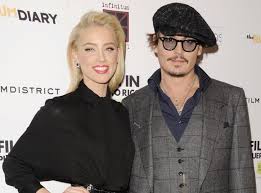 The 50-year-old actor is making a cameo in his 27-year-old ladylove’s new movie, London Fields, based on Martin Amis’ 1989 darkly comic crime novel of the same name. The news was first reported by The Hollywood Reporter. No word exactly what Depp’s role is in the film, which is currently shooting in the U.K. But sources told the trade the Lone Ranger star already shot his scenes after taking time out time out of working on Rob Marshall‘s adaptation of the Broadway musical fantasy, Into the Woods, in which he’s playing the Big Bad Wolf.

London Fields takes place in 1999 and follows a terminally ill American writer named Sam (Billy Bob Thornton) living in a drab London who’s been suffering from writer’s block for 20 years. After going to a seedy pub, Sam stumbles upon a promiscuous psychic named Nicolas Six (Amber Heard) who, after seeing visions of her own future and fears the aging process, decides to plot her own murder, efforts which he subsequently chronicles.

After rumors that they were on the rocks, Depp and Heard were spotted out on a dinner date last Thursday night in London’s Mayfair District. The two met while acting together in 2011’s The Rum Diary. Amber’s most recent feature was Machete Kills, which came out earlier this month. London Fields, costarring Jim Sturgess, Cara Delevingne and Theo James and directed by newcomer Matthew Cullen, is due out next year.