The new project of Amber, Syrup recently start to filming. This movies cast and also . First pictures recently released from the set, we can see Amber with her co-star Shiloh Fernandez. I think they are filming Syrup. Amber is so amazing on this pictures, really chic. I love her hair!! Below you can read a little article from boweryboogie.com about Syrup. 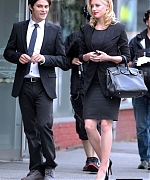 Production is currently underway on a new indie flick called Syrup, which is based on the ten-year-old novel of same by . The dramatic story arc follows “two twenty-somethings trying to make it to the top of the soda industry’s corporate ladder.” Interesting.

According to IMDB, filming started just last week, and has just arrived in the today. The shoot is focused on Broome between Ludlow and Orchard, but will occupy curbisde parking in the immediate vicinity as well.

Syrup is adapted for screen and directed by Aram Rappaport, and stars Amber Heard, (Twilight), and .

No Responses to ““Syrup” Filming on Broome Yesterday”