Here is a little article about the upcoming Amber Heard’s movie : Motor City. We already know that Amber Heard and Gary Oldman are casted for this Albert Hughes‘s movie.

It’s rough out there for a single film. Just ask revenge flick Motor City, which has been on the lookout for a leading man to settle down with for months now. It thought it had found Mr. Right late last year with up-and-comer Dominic Cooper, but just when things seemed to be getting serious, he was all like “I can’t do this” and left. Painful as that was, Motor City refused to sulk and admirably kept itself open, out there, and available. Alas, after promising flirtations with Jake Gyllenhaal and Jeremy Renner ended with an “Oh hey, you’re a real special flick but I’m kind of committed to another film right now,” it seemed like it was time to break out the sweatpants and Haagen-Dazs. But now, when things are at their bleakest, Gerard Butler (a nice enough guy who Motor City totally never thought of as more than a viewer), is starting to look like the one they were meant to be with all along.

Variety reports that the 300 star is in talks to come aboard the Albert Hughes-helmed actioner, as a man who is released from prison and proceeds to hunt down those responsible for putting him there. The pic is slated to start production this June. Hit the jump for more on Motor City.

Per Variety, another Butler project, the heist film Brilliant, is currently scheduled to get rolling around the same time, which, one supposes, could mean more heartbreak on the horizon for this poor, beleaguered Warner Brothers production. Gerard said that Maybe Chris Hemsworth can replace him in ‘Brillant‘.

Gary Oldman (who previously worked with director Hughes on The Book of Eli) and Amber Heard are already signed on to co-star in the pic. Dark Castle Entertainment is producing.

We’ll know more about this movie in June, when it will start to hit!! I’m impatient to know what will be Amber’s character in this movie! Aren’t you ?

Here is a recent about a new project for Amber called ‘Motor City’ where she’ll play with Dominic Cooper (Mamma Mia!, Tamara Drewe). You can read below a new about it.

Amber Heard has been chosen for the female lead opposite Dominic Cooper in Motor City, the 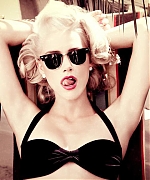 Chad St. John-scripted revenge tale that Albert Hughes will direct for Joel Silver’s Dark Castle. Amber Heard tested among several young actresses and got the job. Dominic Cooper (The Devil’s Double) plays a man released from who goes on a revenge mission, hunting down the people who framed him. Heard, who just starred opposite in The Rum Diary, is repped by CAA. “That is true,” an NBC spokesman said when asked to confirm that the show – starring Amber Heard as a newly-hired but naive Playboy bunny in Chicago – would be replaced with crime-show repeats and a newsmagazine.
The Playboy Club was one of two, heavily-promoted new shows on US network television this season – the other being ABC’s Pan Am – which mimicked the success of and its obsessive attention to 1960s style. But The Playboy Club got off to a rough start, with poor reviews from the critics, only 3.4 million viewers on its Monday night time slot, and seven sponsors bailing out after the first episode on September 19.
It also found itself in the crosshairs of the Parents Television Council, a grassroots family-values organisation that had campaigned via the internet for its cancellation.
“We’re pleased that NBC will no longer be airing a program so inherently linked to a pornographic brand that denigrates and sexualises women,” the group’s president said in a statement.
The Hollywood Reporter noted however that this was no triumph of activism. Citing instead the show’s poor quality and ratings as the primary causes for the action.
“It was bad show, period. The writing was weak, the acting spotty and the sexism too ridiculous and obvious to comment on more than once,” wrote Tim Goodman.
END_OF_DOCUMENT_TOKEN_TO_BE_REPLACED

Amber as the new Red Sonja ?

Here is an article about the project of Red Sonja, that was previously started by , with as Red Sonja, but now it’s possible that Amber will be the new Red Sonja, directed by Simon West (Lara Croft: Tomb Raider).

A few years ago, a reboot/remake/relaunch of Red Sonja was in the works with attached to star and Robert Rodriguez producing.

While that adaptation fell apart, producer Avi Lerner still plans to bring the buxom red-headed barbarian back to the big screen. Lerner tells Empire that they’re planning to shoot Red Sonja after Conan and that (The Mechanic) will direct:

“We didn’t want to start it until we’d finished Conan,” he tells us, but with confidence in Marcus Nispel’s revivified warrior growing, and a sequel already in development, Lerner reveals that “We will definitely shoot Red Sonja in between Conan and Conan 2. We already chose the director: an English guy called Simon West.”

And who does Lerner see as his new Sonja? Rising star Amber Heard. Hit the jump for more on Lerner’s dream casting.

Lerner says West plans to direct Sonja after he wraps on The Medallion starring Nicolas Cage. And as for who he wants as Sonja, it’s Cage’s Drive Angry co-star, Amber Heard:

“We’re talking to a few girls for the role of Sonja,” he says, “but we just finished a movie called Drive Angry with Amber Heard, and I want to see her. She’s my favourite for the role.”

Mandy Lane as a sword-wielding, free-running warrioress? Oh hells yes. “Amber is the new Red Sonja… but she doesn’t know it yet!” laughs the producer. “When you write it she’ll get the shock of her life! She’ll call me and say ‘How dare you talk to Empire before you talk to me?!’”