You are HereHome / Archives for category : ‘Miscs’ (22 items found)

Vote for your Favorite Picture of April!

Hello everyone!! I’ve decided to launch a monthly poll for you, to vote for your favorite pictures of Amber Heard. I’ll select four pictures from the gallery that are recent, and you just have to chose your favorite one with the poll below the picture. I hope you’ll enjoy it! Do not hesitate to share this post if you like it!

For this month of April, you can chose your favorite pictures : I’ve selected four pictures of Amber Heard, from her Guess Girl campaign, from the Vanity Fair Oscar Party, from the set of “Three Days to Kill” and from one of her candid apperance with Marie de Villepin. 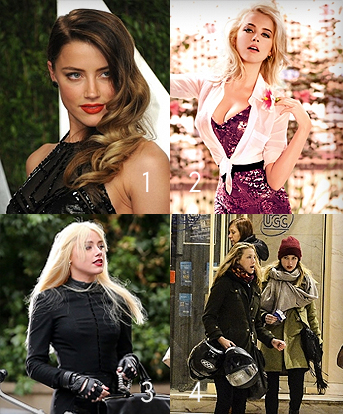 What is your favorite picture for this month of April ?

Hello everyone!! In first, I wish you an Happy New Year!! I hope you’ll have a great year for 2013!! I have uploaded some new personals pictures of Amber Heard from Instragram & some pictures with her fans!! Take a look in the gallery. I’ve also updated some pictures from Amber Heard when she was young, and pictures from Behind the scene of her 24 Hours to plays’s Stage in Broadway. Out Shopping in West Hollywood

Here is a new candid of Amber Out Shopping in on December 20th. She was beautiful again! Love her clothes!! I also make a little ads for my Fansites Order website : Vanity Designs! Order now if you want an High Quality design at good price from me!! Today, we are April 22th, and it’s the 25th Birthday of Miss Heard!! So Happy Birthday Amber!!! Have a nice time with your family and friends to celebrate your 25th birthday!!

Here is the new little video clip of Amber made by Tasya Van Ree who is called . Amber is so beautiful on this, like always. I’ll made captures of this clip later.