You are HereHome / Information / Biography

Here is the full biography of Amber Heard, with many information about her personal life, and her career, since her birth to today. Do not forget to see Amber’s exclusive Trivias here. Amber Laura Heard (born April 22, 1986) is an American actress. She was born and raised in Austin, Texas. Her father, David, is a contractor, and her mother, Paige (Parsons), is an internet researcher for the state, and she also have one sister, Withney Heard. She attended St. Michael’s Catholic Academy in Austin until her junior year, when she left to pursue a career in Hollywood. As a teenager, Heard was active in her school’s drama department and appeared in local commercials and campaigns. At the age of 16, her best friend died in a car crash and Heard, who was raised Catholic, then subsequently declared herself an atheist, due to the influence of the works of Ayn Rand. Dropping out of school at the age of 17, to go to New York to start a career in modeling, she then relocated to Los Angeles to get into acting. According to AfterEllen.com, Heard came out in 2010, at GLAAD’s 25th anniversary event. She is dating artist Tasya van Ree. She has said about her sexuality: “I don’t label myself one way or another – I have had successful relationships with men and now a woman. I love who I love, it’s the person that matters.”
Heard grew up around guns, and owns a .357 Magnum. A fan of muscle cars, Heard drives a 1968 Ford Mustang. She has previously driven a ’67 Mercedes and a ’62 Checker Cab, as she revealed to Jeremy Clarkson during her Top Gear interview.Regarded as a sex symbol, Amber often appears in magazines’Most Beautiful’ and Sexiest lists. She is also involved in social activism for causes such as gay rights and abolishing slavery, and is a supporter of Habitat for Humanity, Girl Up United Nations Foundation, The Art of Elysium and Amnesty International.

In 2011, Amber Heard and Tasya Van Ree (her official girlfriend since 2009) broke up, and a rumor cames along Amber Heard, after the breaking up of Vanessa Paradis and Johnny Depp. Every tabloids talked about a relationship between the two co-stars. Amber is also often spotted with Marie de Villepin in 2013, and they seems to be closer friend, and many rumors goes about a relationship between the both. In April 2013, Johnny Depp and Amber Heard are spotted holding hands while leaving the Rolling Stones concert. Later this year, rumors about their relationship are confirmed, and the two stars are spotted by paparazzis and fans many times together. On February 3, 2015, Amber married actor Johnny Depp in a private civil ceremony at their home in Los Angeles. She filed for divorce on May 23, 2016. On May 28, Amber Heard filed for and obtained a temporary restraining order against Depp, alleging that he had abused her on May 21.

Once in Los Angeles, Amber Heard made appearances in various TV shows and a music video, Kenny Chesney’s “There Goes My Life”. She was cast as Liz in the pilot episode of The WB’s Jack & Bobby (2004), 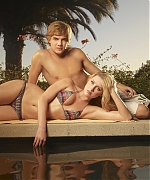 Amber Heard was next cast in the CW Network’s Hidden Palms. On the show she portrayed Greta Matthews, who suffered the losses of both her mother and boyfriend, Eddie, and befriends Johnny, the anti-hero of the show. In order to get the part, Heard was asked to lose weight. It took her four months, daily workouts and a ban on carbohydrates to lose 25 pounds. Hidden Palms premiered in the US on May 30, 2007. Ultimately, The CW wrapped the summer series early; instead of the initial 12 episode arc, only eight were aired. The show ended on July 4, two weeks prior than originally planned.
She was next cast in the title role in All the Boys Love Mandy Lane. The horror film premiered at the Toronto Film Festival in September 2006, immediately generating buzz and landing a deal with Harvey Weinstein. However, nearly a year after its Toronto debut, the movie had not reached theaters. In July 2007, Mandy Lane found a new distribution home and the film finally was released in 2008 with a February UK release and DVD release in June. 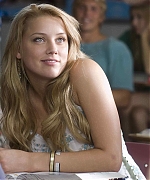 In 2007, Heard also appeared in the short movie Day 73 with Sarah and Jess Manafort’s indie drama Remember the Daze (aka The Beautiful Ordinary), which premiered at the Los Angeles Film Festival in June and opened in limited release in April 2008. She then appeared in the Judd Apatow-produced, Rogen and Goldberg-written comedy Pineapple Express and the martial arts drama Never Back Down, released in 2008, back-to-back. The latter opened in March and Heard played the role of the free-spirited Baja Miller who falls for Sean Faris’ Jake Tyler.
Heard also made a brief appearance in Showtime’s Californication and joined the ensemble cast of The Informers, based on Bret Easton Ellis’ novel of the same title, set to be released in 2009. She also filmed the horror film The Stepfather and the comedy film Ex-Terminators back-to-back in 2008 while promoting Never Back Down, Mandy Lane and Remember the Daze. In late 2008 she filmed The River Why and The Joneses; two independent features. At the beginning of 2009 The Informers made its premiere at the Sundance Film Festival. The reviews were mostly negative. Heard next appeared in Zombieland, playing a small role as the object of Jesse Eisenberg’s affection who turns into a zombie. She will subsequently appear in John Carpenter’s The Ward. In March Heard begins filming The Rum Diary, opposite Johnny Depp, in Puerto Rico. Heard is reported to have won the role out over Scarlett Johansson and Keira Knightley. In 2010, she starred in and produced And Soon the Darkness, co-starring Odette Yustman and Karl Urban. In the October 2009 issue of Teen Vogue, Amber describes her role as Johnny Depp‘s love interest in the film, The Rum Diary, as “the best experience of my life.”
In February 2010, Heard was cast in Drive Angry, a 3-D psychological thriller directed by Patrick Lussier and released in February 2011. In February 2011, she appeared on Top Gear in the UK. She talked about her love of guns and muscle cars, and revealed that she used to line-dance in Texas bars. In 2011, Amber started the project of NBC‘s The Playboy Club, where she plays one of the main character : Bunny Maureen. The show is really promoted, and air his first episode on 19 September 2011. Unfortunally, the show is stopped by the NBC Network after just three episode, because The Playboy Club didn’t generate high enough ratings for NBC, and also because of the Parents Television Council make all their possible to stop the show, because of his “sexual” content.
Amber became the new face of the famous brand Guess, and she make the Fall Winter 2011-2012 and the Spring Summer 2012-2013 collection where she was directed by the famous Ellen Von Unwerth for advertissements of the new collection, where she filming with the model Silviu Tolu in an amazing vintage campaign.
On October 28th 2011, the movies The Rum Diary, where Amber plays Johnny Depp’s love interest (Chenault) released. Amber also started to filming her new movies project : Syrup, where she plays with her co-stars Shiloh Fernandez, and the Twilight star’s Kellan Lutz. The movie released on 2012.

In the middle of 2012, she is set to star in Machete Kills, the next movie after Machete, directed by Robert Rodriguez. The movie will release in September 2013. Amber Heard is also cast in Paranoia, a movie where she plays with Gary Oldman, Liam Hemsworth and Harrison Ford. This movie is directed by Robert Luketic (Legally Blonde, The Ugly Truth), and released in August 2013. In August 2012, Heard was in talks to replace Kristen Stewart, who abruptly dropped out in Nick Cassavetes‘ upcoming thriller Cali. Heard will play Mya, who goes along with her lover, played by Alex Pettyfer, in filming a fake snuff film. They make a lot of money and escape Los Angeles only to return a year later to try and rescue Mya’s sister from a group of suspected thugs. This role is still a rumor. In January 2013, Amber Heard started to film her new movie ‘Three Days to Kill‘ where she plays with Kevin Costner, a movie directed by McG (Terminator Salvation, Charlie’s Angels) and who is also written by Luc Besson. The movie released on February 2014. ‘London Fields‘. In this movie Amber plays the main character Nicola Six, a Clairvoyant femme fatale who has been living with a dark premonition of her impending death by murder. She begins a tangled love affair with three uniquely different men: one of whom she knows will be her murderer. The movie is star Jim Sturgess, Theo James, Billy Bob Thornton and Jaimie Alexander. She started to shoot the movie in London on September. Amber Heard is also the current face of new Guess fragrance for women Guess Girl and Guess Girl Belle, after her campaigns for the Fall/Winter 2011/2012 Collection and the Spring Summer 2012 Collection. In 2014, Amber Heard joins the cast of two new movie project : ‘When I Live My Life Over Again‘, a drama movie directed by Robert Edwards, where she plays the main character, Jude, in a grunge look. She also joins ‘The Adderall Diaries‘ a movie directed by Pamela Romanowsky, where she plays with co-star James Franco, for the second time (after the Pinneaple Express). She plays Lana Edmond in this Action, Drama and Thriller movie. Both movies released in 2016.

Amber Heard also had a supporting role in Tom Hooper’s The Danish Girl (2015). The film premiered at the 72nd Venice Film Festival to positive reviews and was released on November 27, 2015. Her performance was

described as “minxy” and “staggeringly good.” Her co-star Alicia Vikander stated in an interview that Heard was in two “extraordinary” dance scenes which were cut from the final release due to length but both Alicia and Eddie Redmayne insisted on putting them on DVD extra materials. On January 13, 2016, it was reported by The Hollywood Reporter that Amber was in talks to play Mera, Aquaman’s Atlantean Queen, in the upcoming 2018 film, Aquaman. This film will be part of the DC Extended Universe film series; the report indicated that Mera will first appear in Zack Snyder’s Justice League, which premieres in 2017. On March 17, 2016, Amber Heard confirmed on ET her ‘Aquaman’ role in Justice League. She has been cast as Mera, the undersea queen and wife of Aquaman in the DC Comics canon. She will make her first appearance as Mera in 2017’s Justice League before appearing in the 2018 standalone Aquaman film opposite Game of Thrones star Jason Momoa.